Have you ever thought, “how do you know if your boyfriend is losing interest in you?” It’s a question lots of women ask themselves in the beginning stages of their relationship. Over time, the good thing is that you’ll learn to tell whether or not your man is losing interest. But it can be frustrating at first as that is not what women expect.

It’s hard to feel confident when you wonder if your boyfriend is losing interest in you. You might be wondering if he even wants to break up or if he’s the one who initiated it. On the other hand, it could be he isn’t talking to you like before and is avoiding you?

He’s no longer excited to see you

You don’t want to jump to conclusions, but if your boyfriend seems less enthusiastic about seeing you than he used to be, it could be a sign that he’s losing interest. If this is the case, pay attention and note how often this happens. Does he seem distracted or preoccupied when he sees you? Does his enthusiasm for each interaction drop over time?

He asks less and less about your life

The second sign that your boyfriend may be losing interest in you is if he asks less and less about your life. This can include not asking about an important project you’re working on. Or not asking about details of an event that happened in your life. If someone has lost interest in something, they are less likely to ask questions. It’s simply not interesting anymore.

If this happens with your boyfriend after a few weeks of dating, it may be because he’s losing interest in the relationship and his feelings for you (or vice versa).

He starts arguments with you more often

If your boyfriend is starting arguments with you more often, it could be that he’s feeling stressed at work or insecure about the relationship.

He may also think that you’re not listening to him or understanding him.

Or if he acts rudely towards you, or picks a fight to spend less time with you and avoid discussing the problem. If this happens regularly, it could be a sign of losing interest in the relationship.

He stops contacting you as much as usual

If you have noticed reduced communication, they may be cause for concern. If it’s been a while since he has called or texted, this is an indication that something could be up.

He may have lost interest in you or found someone else who interests him more.

He could also be busy with work or other obligations that prevent him from reaching out to you as much as usual.

If he isn’t making much effort to talk to you or his responses are vague, something may have changed for him emotionally (which could mean losing interest).

He is no longer very affectionate towards you

If your romantic partner loses interest, he may not be as affectionate towards you. For example, he may not want to cuddle up on the couch or give you kisses in public.

He works lots of overtime or hangs out with friends more

Your boyfriend may be spending more time at work and with his friends because he is just busy. But it’s also possible that he no longer wants to spend time with you, so he is trying to escape as much as possible.

If you notice that your boyfriend has been working late or hanging out with friends more often, it could indicate trouble in the relationship. He may be spending more time with his friends to avoid you, or he may just be trying not to think about whatever problems exist between you by doing something else entirely. It could be either a combination of both things—whatever the case may be, this behavior should raise some red flags for any woman interested in keeping her man around.

He makes plans without you

He made plans without asking if they were okay with you first (like going out with his friends instead of coming over). If your boyfriend makes plans without asking if they’re okay with you first and then expects that those plans will change so he can do something else instead, then this may mean he’s losing interest in the relationship because what he wants matters more than what you need from him at this point in time.

If your boyfriend has been buying new clothes, especially new underwear, it might signify that he is trying to make himself more attractive to someone else. Men can have a hard time getting over their previous relationships and sometimes need an excuse to feel like they are dressing up for someone new.

If your boyfriend is buying new underwear for himself, this may not mean anything about his feelings towards you; it could just mean that he wants to get laid!

There’s a lot of pressure on men to be good lovers, but that pressure can also lead to anxiety and performance issues.

You might think that if your boyfriend is having sex with someone else, he’d be so busy doing it that he wouldn’t have time to learn new moves. But actually, men who cheat often feel the need to prove themselves as lovers — even if they’re with someone they’ve been with for years.

They’re saying: “I’m not happy with what we have. I need something better.” So they look elsewhere for it.

If your man is cheating, you may notice a behavior change. For example, he may want to try new things sexually that he learned from his new lover — something that you may not be willing or able to do. He may even want you to try some of these things so he can compare them in his mind and see which one is better.

He stopped talking about his future with you (marriage, kids, etc.)

A guy who’s losing interest in you will start to act differently. For example, he may be less affectionate, or he might suddenly have a lot of “plans” that don’t include you.

Other signs to look out for include:

Conclusion – How do you know if your boyfriend is losing interest in you?

If you notice some of these signs, talk to your boyfriend. Take a step back and try to figure out how you feel. Do you still want to be with him?

Have an honest conversation about the relationship and where it’s heading – but don’t put too much pressure on him either. If he does not respond well to that conversation, then it might be time for you to move on. If your relationship is worth saving, another option would be to talk to a relationship expert.

How do you know if your boyfriend is losing interest in you? There is a saying, “where there is smoke there is fire.” If you have to ask, then there is probably something to it. Always go with your gut instinct.

How do you figure out that the guy you’re dating isn’t interested in a relationship with you? 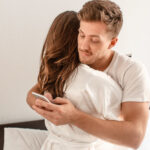 If you’re wondering if the guy you’re dating is interested in a relationship with you, here are some quick tips to help you figure it out.
– He doesn’t talk about the future. If he wants to keep things casual and not make any plans for the future, he will probably avoid talking about that.
– He avoids talking about his feelings. If you ask him how he feels about something and he doesn’t have an answer, then it’s a sign that he just doesn’t want to tell you or that he really doesn’t care all that much.
– He avoids spending time together outside of your date nights. If he doesn’t want to hang out with you outside of your dates, then it’s a red flag that he isn’t interested in being your boyfriend.
– He only talks about work and other people when you’re together. Suppose all he does is talk about work and other people when you’re together instead of making an effort to talk about personal things or who you are as an individual. In that case, chances are good that he just sees this as an opportunity for a fling or hookup rather than something more severe or long-term.
– He never brings up his feelings or emotions when you’re together (even if they’re negative).

How do you know if your man is losing interest in you?

What is the difference between a positive and negative relationship?

A negative relationship can cause stress and anxiety, while a positive one can make you feel good about yourself and your life.

Click here to cancel reply.
This site contains affiliate links. When you click on a link and make a qualifying purchase, I may receive a small commission at no additional cost to you. Thank you for supporting Heavns.com!

We use cookies on our website to give you the most relevant experience by remembering your preferences and repeat visits. By clicking “Accept”, you consent to the use of ALL the cookies.
Do not sell my personal information.
Cookie SettingsAccept
Manage consent

This website uses cookies to improve your experience while you navigate through the website. Out of these, the cookies that are categorized as necessary are stored on your browser as they are essential for the working of basic functionalities of the website. We also use third-party cookies that help us analyze and understand how you use this website. These cookies will be stored in your browser only with your consent. You also have the option to opt-out of these cookies. But opting out of some of these cookies may affect your browsing experience.
Necessary Always Enabled
Necessary cookies are absolutely essential for the website to function properly. These cookies ensure basic functionalities and security features of the website, anonymously.
Functional
Functional cookies help to perform certain functionalities like sharing the content of the website on social media platforms, collect feedbacks, and other third-party features.
Performance
Performance cookies are used to understand and analyze the key performance indexes of the website which helps in delivering a better user experience for the visitors.
Analytics
Analytical cookies are used to understand how visitors interact with the website. These cookies help provide information on metrics the number of visitors, bounce rate, traffic source, etc.
Advertisement
Advertisement cookies are used to provide visitors with relevant ads and marketing campaigns. These cookies track visitors across websites and collect information to provide customized ads.
Others
Other uncategorized cookies are those that are being analyzed and have not been classified into a category as yet.
SAVE & ACCEPT